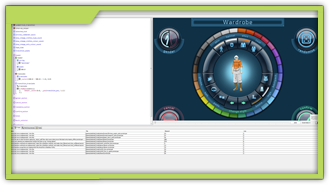 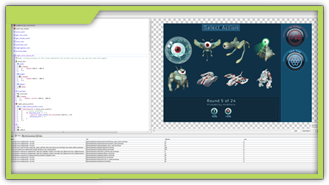 Fenforge is a game engine and programming language which is designed to make the development of online multiplayer games quicker, easier, and less error prone.

It is generally a rule that the more flexible an engine is, the less it can do automatically, and the more you have to write yourself. We have many years of experience creating multiplayer games, and have long had the dream of defying this rule, and coming up with a way of representing and processing a multiplayer game that is easy, general purpose, and efficient all at the same time! For a long time this just seemed impossible, but after many years of trying, and a few dead ends, we have finally come up with a solution that really works!

Why do we need another engine?

There are plenty of engines out there that allow you to make single players games very fast, and there are many engines with excellent graphics. However most of the existing multiplayer engines are not as flexible as we would like, and are tailored for making only a specific genre of game well (for example just first person shooters). Even then they often require a lot of customisation.

Fenforge however is general purpose and can be used to make any type of multiplayer game as easily as if you were making a single player game, and deals with all the latency, prediction and networking automatically. You don't even have to write a seperate server and client! We do not believe this is something which can be effectively bolted onto an existing engine as an afterthought. To get this working really well has required us to first design our own programming language which represents the game in a fundamentally different way, and then build the entire engine on top of that idea.

Can I use Fenforge to create my own game?

Fenforge is still in development and we are not ready to share it just yet. Whilst we are now sure the concept works, we still have quite a long roadmap of improvements we want to make. We still make backwards compatibility breaking changes on a regular basis so it's not ready for release just yet. However our long term goal is to release this as a product in its own right. In the meantime you can enjoy some of the games we are creating to demonstrate the engine and prove it works. 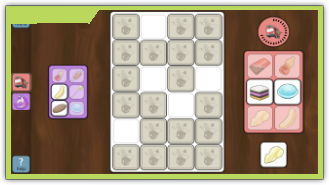 Before using Fenforge to create a large game, we decided it would be wise to first create a smaller game to test that Fenforge works correctly. Our first game therefore is a suite of multiplayer games for younger children called Iona's Toybox. Iona's Toybox is currently being tested and is coming very soon to the App Store. 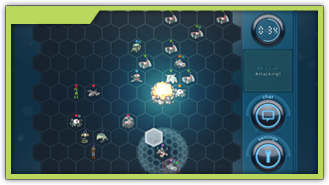 Our second game Solstrike is a turn-based strategy game. It is quick to learn but hard to master. There lots of new units to unlock as you play the game, allowing you to customize your loadout to match your play style. Solstrike is currently still in development.

We also have another (currently top secret) game in development. Our third game will be much larger. We aren't ready to reveal much more about this yet, so check out the News And Updates section below to choose the most convenient way to keep informed.

To keep up to date with all the latest news, and for a sneak peek of what are we working on from day to day, follow the company's founder @AndrewCGower on Twitter.
This website is operated by Fen Research Ltd, which is a company registered in England and Wales (registration number 7285955) whose registered office is St John's Innovation Centre, Cowley Road, Cambridge, CB4 0WS, United Kingdom. Use of this website is subject to our terms & conditions, privacy policy and cookies policy.